It’s Almost Window Smashing Season: A Case for Bringing your Dog in the Car 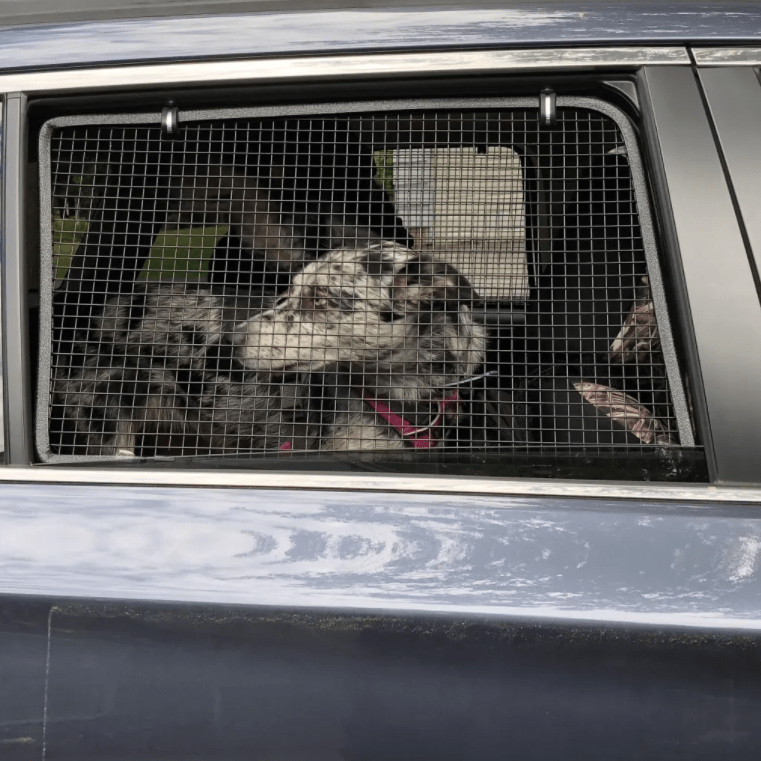 So it finally happened.

I knew being a person who travels the country with her dogs I would one day be affected by the nation’s obsession with “rescuing” dogs from cars. And on a mild, drizzly January day I returned to my car to take my dogs for a walk and found a distraught parking garage attendant waiting for me.

To set the scene, we were in Philadelphia vacationing for the weekend. We spent the morning walking the dogs and exploring the grounds of some of the most historic buildings in our nation’s history. It was a rainy day, so we found an underground parking garage to park in so the dogs wouldn’t have to be parked on a noisy busy street.

After spending an hour exploring all together, we brought the dogs back to the car, gave them each a frozen KONG, (that we had prepared at home and brought on the trip) so that they would have something yummy to have while we went out for a few hours at a museum without them.

We took off their rain jackets, popped them into their padded crates, handed out KONGs and locked them. The same routine I’ve done for almost all the temperate days of my life for the last 8 years.

When we returned to the car a few hours later I popped open the trunk to find my dogs happily sprawled out and napping. I started to put their harnesses on to get them out for another walk when the parking garage attendant came running up to me, exasperated.

“The cops were at your car! They nearly broke your windows to rescue your dogs! You need to leave!”

Rescue my dogs? You mean these sleepy pups laying in $600 worth of crash resistant crates on this 50 degree January day in the cover of a parking garage?

“Leaving your dogs in the car is illegal in Philly! They were going to break your windows and take your dogs to the pound!”

The guard then implied that he stopped them from doing so. I don’t know what actually stopped the cops and honestly, I don’t know how they even knew the dogs were there. My dogs don’t bark in the car. My windows are tinted. The crates open to the front of the car that was facing a wall. Did someone see us walking the dogs back to the car and call on us? Did someone get nosy about the DoggyU magnets on my side doors and then get close enough to the car to peer in the windows at the dogs? I have no idea.

Without full knowledge of the dog laws in Philadelphia, I apologized to the man and we got the heck out of dodge. We drove the hour round trip to bring the dogs back to our pet friendly hotel. We dragged crates to the hotel room, brought the dogs inside, redistributed KONGs and left them in the exact situation they were in in the car except without the ability for us to check them every few hours, or for them to join us for walks around the city. We were incredibly flustered to say the least.  We thought about how traumatic it would have been for our sensitive dogs to have their windows broken in the car, dragged out of their crates and brought to a pound without knowing what was going on.

But on the drive home, here is what I learned from a quick google search (source):

In October 2018 Gov. Tom Wolf signed The Motor Vehicle Extreme Heat Protection Act which allows police and humane officers to be protected under the law when breaking into cars to save animals left alone in extremely hot vehicles.

The law states that:

I’m guessing what stopped the officer from breaking my windows is that it would have been illegal to do so under the definition of the law. It is illegal to leave dogs in cars in Philadelphia, but only in hot cars, or situations that would endanger their well-being. And I’m pretty sure 50 degrees in a parking garage doesn’t constitute a heatwave.

And here’s the other thing. My information is in giant letters on the side of my vehicle. If they were truly concerned about my animals, they could have easily used that contact information to reach me. I welcome it. If you think my dogs are in any sort of distress, please, give me a call, email me, text me, contact me through the contact page on my website, listed on the side of the vehicle. I don’t want to see my dogs in distress any more than you do!

But here’s the thing. My dogs weren’t in distress. And leaving my dogs in a vehicle on a January day doesn’t make me a bad person, or a criminal, or give passersby the right to break into my car and traumatize my animals.

The proliferation of social media posts with people proclaiming they would break any window to “save” a dog makes me cringe. Social media has suddenly given every person that walks by a car the ability to feel vindicated if they deem a dog is in distress and “rescue” them. Normal people who can’t even list the signs of heat exhaustion in dogs (excessive panting, reddened gums, vomiting, loss of consciousness) are suddenly experts on what constitutes a dog in distress. What they don’t understand is that many wonderful dog owners choose to have their dogs with them on a daily basis. They augment their lives by taking them on trips, letting them see new places and allowing them to be the ride-along dog the dog wants to be instead of sitting alone in the house day after day.

We can all agree that leaving dogs in very hot cars is bad. But leaving dogs in cars that are properly equipped to comfortably house unattended dogs is not bad. The people that bring their dogs out into the world are not villains. Creating a culture that finds leaving a dog home alone all day preferable to them being out in the world in a safe and humane way, is frankly more threatening to the health of our dogs than becoming educated on how we can safely take our dogs with us on car trips.

So let’s all stop posting self-righteous memes about breaking into cars like this is the moral and upstanding thing to do. Let’s educate other humans on safe ways we can leave dogs in cars, stop vilifying dog owners who travel with their pets, judge each situation on a case-by-case basis, and let’s ensure that the dog remains safely by our side as our most loyal and trusted co-pilots.

You can support our blog/youtube channel by shopping our amazon store at https://www.amazon.com/shop/doggyu and subscribing to our youtube channel at youtube.com/doggyu for dog training and travel tips.

I installed BreezeGuards on my Honda Odyssey minivan today. Love them! They are going to work very nicely to keep my 18-month old Bernese Mountain Dog from going out the window to chase a squirrel again.~ Melanie K. I love my BreezeGuards! So do most of the dog owners who see them on my car. I give them all of them your business card! ~ Nancy N. I have never posted any testimonials before about a product but because I was so impressed with your invention I found myself posting a photo of the BreezeGuards on my car and a testimonial to Facebook so that all the people I know could see them….hopefully this will generate more business for such a brilliant invention. ~ Sheila T.

My husband and I bought a set of BreezeGuards a few months ago for our Subaru, and we just recently bought a truck. So now...I get to buy another set (because they're great!) and it's going to be a hot ride for the pups when we have to make stops.~ Allyss J. We train police, corrections & home protection dogs in Ohio. I recently got your screens for one of my cars and love them. ~ Krishea O. As you know from my previous orders, I'm a big fan of your BreezeGuards! My 2010 Toyota Corolla was hit from behind and totaled but the BreezeGuards were only slightly bent...a testament to their sturdy construction! I hate to see them just lying around, if someone else could use them. ~ Natalie P.